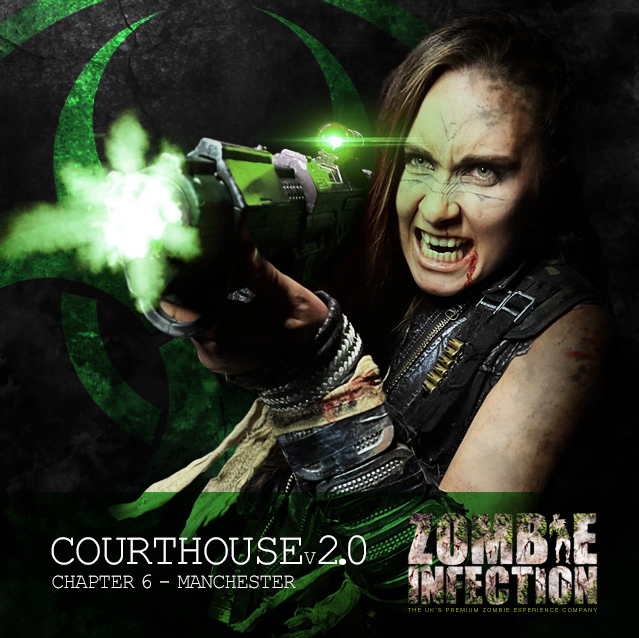 Synopsis :- ” The year is 2030, the world is in recovery mode from yet another global infection far worse than anything seen before.

This new infection labeled ‘Promeagen XF-II’ by Harvertech’s finest but known in the slums as ‘The Visk’ almost instantly gains control of a living or deceased brain functionality, reconfiguring its intention so that it can pass on its biological matrix to the next organic faster than ever. With every new embodiment the world is losing the war against the undead.

Harvertech’s latest vaccination outpost ‘Gamma Courthouse’ in Manchester is claiming that they have the methods to stop this new strand in its tracks. But first they’ll have to deal with some unwelcome guests from the outer limits…”

Quora, Logan & the other Infection Rebel units are back in this all new Zombie Experience for 2021. This is the Courthouse 2.0…

The Courthouse Event in 2017 broke all the rules when it came to immersive zombie experiences, winning the National Scar Award for UK’s Best Zombie Experience in its first year. Now ZI have stepped up the game once again with this all new bigger and more expansive experience.

Grab ultra realistic weapons, then get your game face on as you’ll face film realistic zombies in this 2 hour blockbuster immersive experience.

No listings were found matching your selection. Something missing? Why not add a listing?.
Previous
Next
info@zombieinfection.co.uk
Website