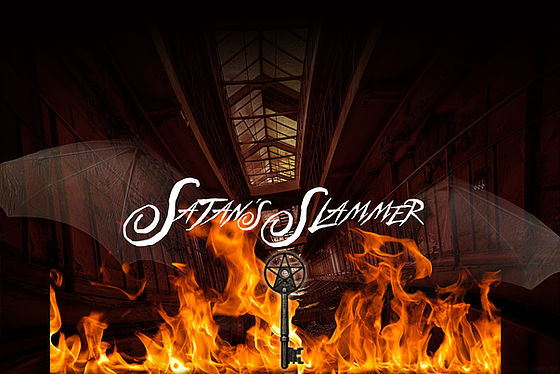 Satan’s Slammer. A house of demonic correction. A labyrinthine prison for the diabolically insane. Their crimes – human sacrifice. Cannibalism.
Death by dark arts.

Some tell of the Great Beast Reborn who looms within these abandoned walls. Alexis Crowley – son of ‘the most evil man alive’ Aleister Crowley. As deranged Prison Governor, he and his satanic warders have formed a coven – The Order of Satanic Science – to harvest evil energies and fuel their fiendish ambitions.

But those incarcerated and tortured here are dreadfully broken and linger at the edge of death. The Great Beast Reborn craves new souls – new evils – new energies.

You will join the chain gang – be checked in and led deep into the dark maze of dungeons to await your satanic sentence and take your place on Death Row.

Witness his vile warders perform the tortuous Ordeals by Fire, Water, Earth and Air – and finally the dreadful Ordeal by Satanic Spirits.. and what lies in Cell 666?
​
Be warned! This is the domain of living demons!
Those bold enough will find a way out… maybe… but be warned what you encounter will drive you to the very edge of sanity – prepare to meet the face of pure evil as you travel the Devil’s own dungeons!