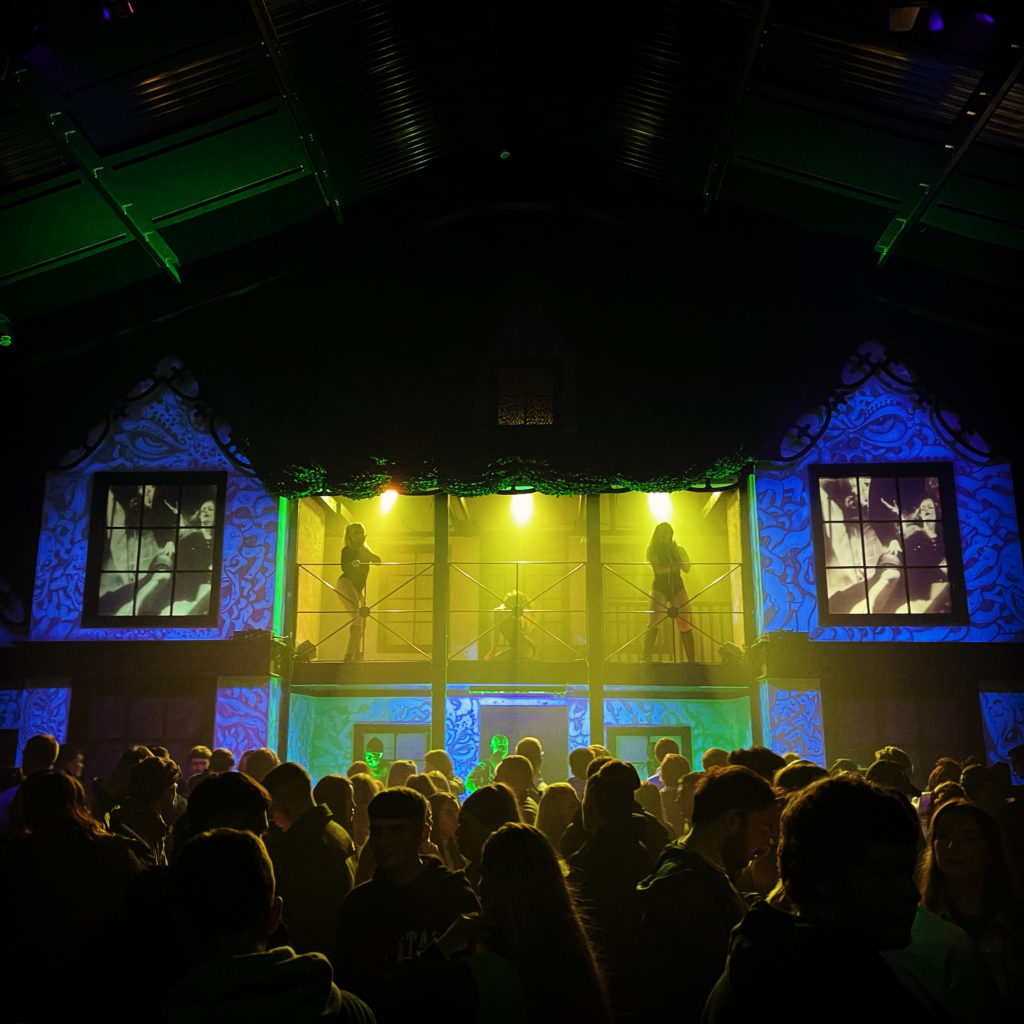 Farmaggedon is a well known event near Liverpool that regularly hosts sell out nights through the month of October.

We visited on a busy Sunday evening. It’s worth noting that you should expect to queue at this event. Though what Farmaggedon do well is create spaces where queuing is a fun experience either in a space with a DJ or a number of dancers on a stage. There is always something to entertain you while you wait for your turn in the mazes. You may also catch one of the hilarious street team popping up.

The site itself is large and has a great atmosphere. It definitely has a fun party/festival vibe that is hard to beat. The roaming actors have always been superb and while we didn’t have as many interactions this year the ones we did meet were definitely working hard and interacting well with the guests.

We started the night with a bit of zombie paintball, a fun concept where you sit on a trailer as it’s towed along past a cornfield with a number of set scenes. You have the opportunity to shoot zombies to your heart’s content (well at least until you run out of paintballs, which you can pay to get more of). We enjoyed this experience last time and while the tractor ride remains unchanged the experience is always a good laugh and was the highlight of the evening.

Sadly there is little to say about this maze. It has no theming at all. The actors really struggled to land any scares except one fun interaction with a character who really wanted my eyes. The genuine labyrinth made scares really hard to land as you had guests walking round in all directions. A free flow maze is a great concept but we feel the actors need a little more direction to herd guests towards the exit.

This is a fantastically themed 3D maze with lots of interesting paint effects that jump out of the wall or sometimes look as if moving. The actors use this 3D effect to hide well and scare customers but due to the batching system which unfortunately was a running theme across all mazes the actors had no time to reset meaning scare after scare fell flat.

The Beast of Terror

Another incredibly themed maze. Using multiple levels as well as massive animatronics. This maze had a number of scripted sections that were unfortunately let down due to the constant flow of people not giving the actors the time to properly reset. This unfortunately detracted from the maze itself as we spent a number of moments queuing in corridors.

A fun concept which starts with a fantastic new opening scene as we as guests are sent to be slaughtered. The theming again is superb throughout and fits the setting really well. Of the night this maze had the best scares but still the running theme around batching continued, making it hard for actors to sufficiently scare.

It’s a shame we had such a bad time with batching as the overall event has a great vibe. But sadly the key reason we attend scare attractions is to be scared and this just didn’t happen on this occasion. The event runs throughout October but our recommendation would be to try and attend on a quieter night where batching maybe isn’t so bad.

Our visit to Farmageddon was a real mixed bag. We can’t fault the theming, street team and additional entertainment across the entire site. The event itself is well designed except for sadly one very important aspect. People end up at times forming queues inside the mazes. This completely ruins the experience and needs to be changed. As we walked round the mazes we felt that well spaced groups of around 6 would work well. The actors would have enough space to scare the front and the back while having time to reset before the next group came through. We appreciate this would increase queue times but we would prefer to queue longer with ample batching than the current setup.