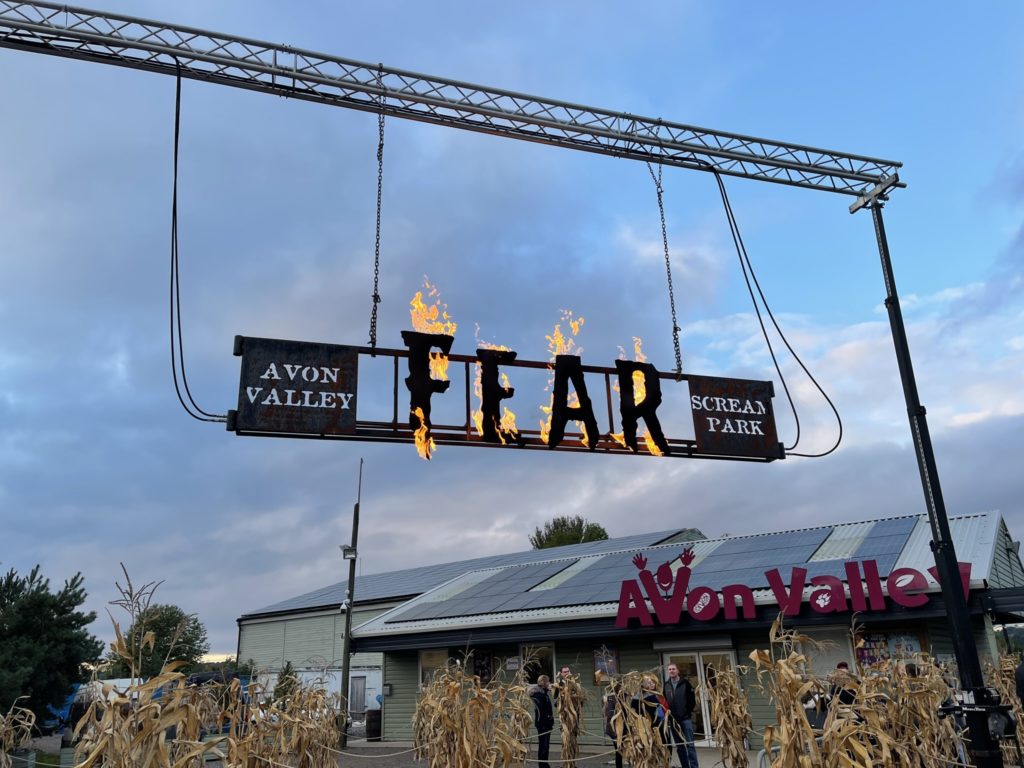 Back in the pre-COVID times of 2019, Fear at Avon Valley was one of our favourite events, so we had high expectations when we returned on opening night. We arrived nice and early so had a short wait for the park to open but quickly got access through the seemingly very fast spinning trummel. As there was a bit of a wait for the mazes to open we did a quick walk around the always impressive venue to see what obvious changes had been put in place.

The most obvious changes were the replacement of Phobia with the new maze Malefica, but we noticed that House of Clowns and Anarchy:Live had swapped places. On a massively positive note the toilets were now a permanent block that is part of the normal Avon Valley Adventure and Wildlife Park. On a less positive note the excellent zombie paintball sadly wasn’t running. In the main hub you still have a number of food and drink options, a couple of midway style games and three fairground rides. On top of all that you have the excellent hourly fire and light show with different acts taking centre stage.

Anarchy:Live is a concept we love, you’re plunged in to a ‘Running Man’ style survival game show. We had several runs through Anarchy and felt that it was shorter than before and probably our least favourite of the night, probably more due to the length and the other very strong mazes on offer. That said the intensity massively ramped up on later runs, when the actors weren’t afraid to get very up close and personal and offering some fun interactions. With all of that and the free-flow sections where you may get split up it added up to a good maze for us.

You pretty much know what you’re going to get in a maze called ‘House of Clowns’ and it does exactly what it says on the tin. Some great set design and artwork throughout, a truly disorientating flappy section, and a fun and occasionally intense final section where the actors use webbing ‘walls’ to get some great scares in. Another solid maze.

New for 2021 and replacing Phobia we have Malefica. The story line, which starts with a good bit of theatrical exposition explains that we are about to enter the ruins of a church that was burnt down in the 1920’s and is now being restored. Unfortunately, the ruins are haunted by the vengeful spirit of a nun. The sets, props and actors are all on point in here and we got some good scares in a number of different places, and some very cool ones in some dark corridors. A great new maze for the line up

Just remember to smile when you enter VITA NOVA. VITA NOVA remains as superbly intense as ever on it’s return. Whilst we were always batched in the same group we never saw each other again until after we’d exited the maze, so every run almost felt like it was solo. On every visit to the facility, apart from in some of the more theatrical elements which give the actors the opportunity to split up groups on multiple occasions we hardly saw anyone allowing the actors to get in a multitude of intense and impactful scares. A superb maze.

X4 has gone through some changes, mainly in the opening theatrical scenes and is all the better for it. Whilst all the actors in here were wonderfully on point, one actor stands out as they gave a brilliantly varied and hilarious silent performance on every run through. This was our favourite maze of the evening and again gave us some superb scares each and every time we visited and we happily kept going back as each run continued to offer something new. A really excellent maze.

Whilst the street team felt a bit thin on the ground this year, our interactions with them were always fun and we also managed to get in some snippets of the excellent hourly shows on the main stage. They are well worth checking out if you have time.

Fear at Avon Valley thankfully remains one of our stand out events, it was a great evening with some memorable and genuine scares throughout. The whole event had a great festival style atmosphere and we had a wonderful time. Fear at Avon Valley runs on selected dates through to 31st October. If you are in the area it’s an absolute no brainer and if you can stump up the money for a VIP fast pass, we feel it’s well worth it as you’ll get to enjoy all the mazes multiple times, something that we never got bored of doing.