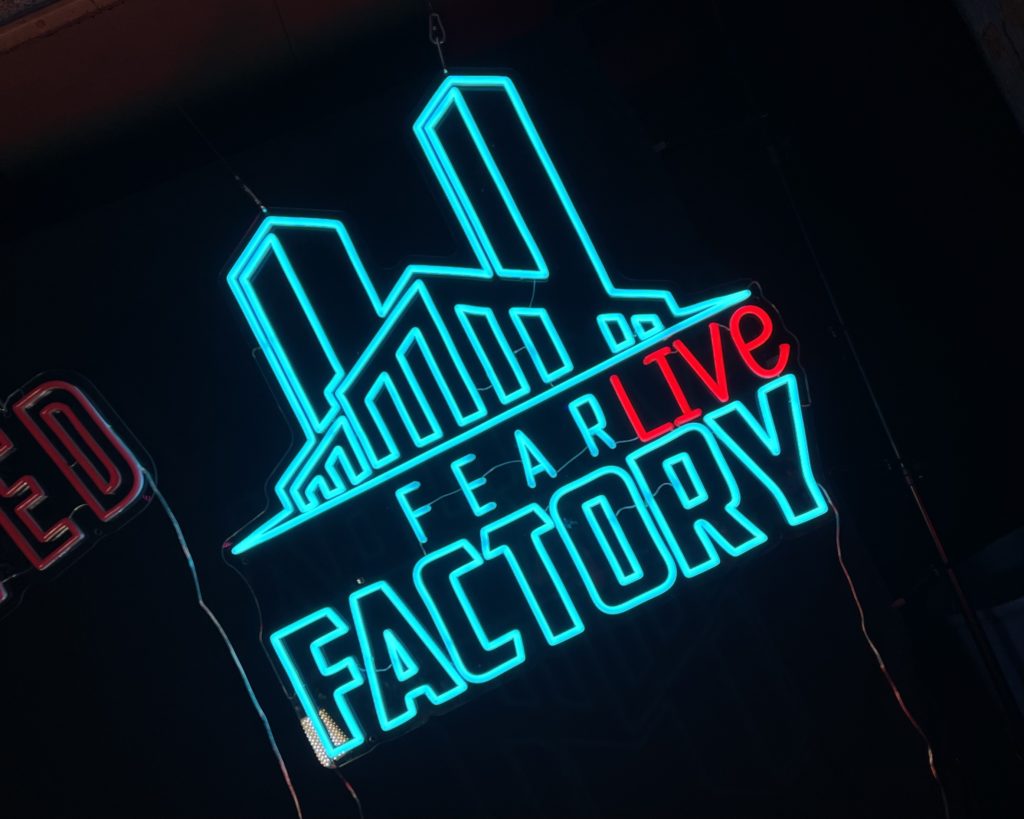 Fear Factory Live is a brand new event that takes place at Ena Mill in Atherton, Greater Manchester. We were fortunate enough to be invited along to experience this event on its first evening which was also a mini press event. We arrived at the traditional northern mill with its very impressive facade. It’s worth noting the event is on the fourth floor of this building so be prepared to ascend four flights of stairs to get to the start of the event.

When we finally managed the trek up the stairs, we were impressed by the bar and eating area. It had a really nice vibe and atmosphere with many authentic parts of the mill on show, a superb neon sign and a great view. Food and drink options include cocktails, beers, wine, soft drinks and they’ve done a collaboration with another local company to provide very tasty wood-fired pizzas all at a reasonable price.

After meeting some of the team behind Fear Factory Live who explained a little bit of their background, history and what they were trying to do within the event we were invited to join a few others in a small group to go round our first run of the event. Immediately it became clear that this was a much more immersive theatre style attraction rather than a traditional walk round scare maze, which has a narrative that continues throughout.

The theatrical style continued throughout the rest of our run of the maze but we did have a number of good traditional jump scares and were impressed with the sets and design in a number of places, especially with the authentically creaky floorboards. It’s worth noting that Fear Factory Live obviously is a first-time event and doesn’t have quite the same budget that you might expect to see in terms of set design from some of the bigger more established events but what they have been able to put in place is still pretty impressive.  A few rooms in particular stand out with great set pieces and we know from talking to the team that they will continue to improve upon this throughout the run.

Overall we were really impressed with what the team have managed to put together especially as it’s a first-time event. They have clearly put a lot of passion and effort in creating a bunch of scares and entertaining theatrical elements that are really quite innovative and certainly bring something new.

This isn’t the longest attraction that you’re likely to attend, you’re probably going to be in there for around 15 minutes. For the money, which is £12.50 off-peak and £15 peak we feel this represents good value plus at the end you have a really cool bar and some very tasty pizza options so you can chill in the impressive area that you have on the 4th floor of the Mill. The only downside we could see is that there’s just one toilet so there may be a bit of a queue when busy.

Fear Factory Live runs until the end of October on selected dates. Check out their website or social accounts for full details but if you’re in the area and you fancy something a little bit different to your traditional farm park scare attraction then it’s well worth checking out and we can’t wait to return again and see what the team have put together for next year.