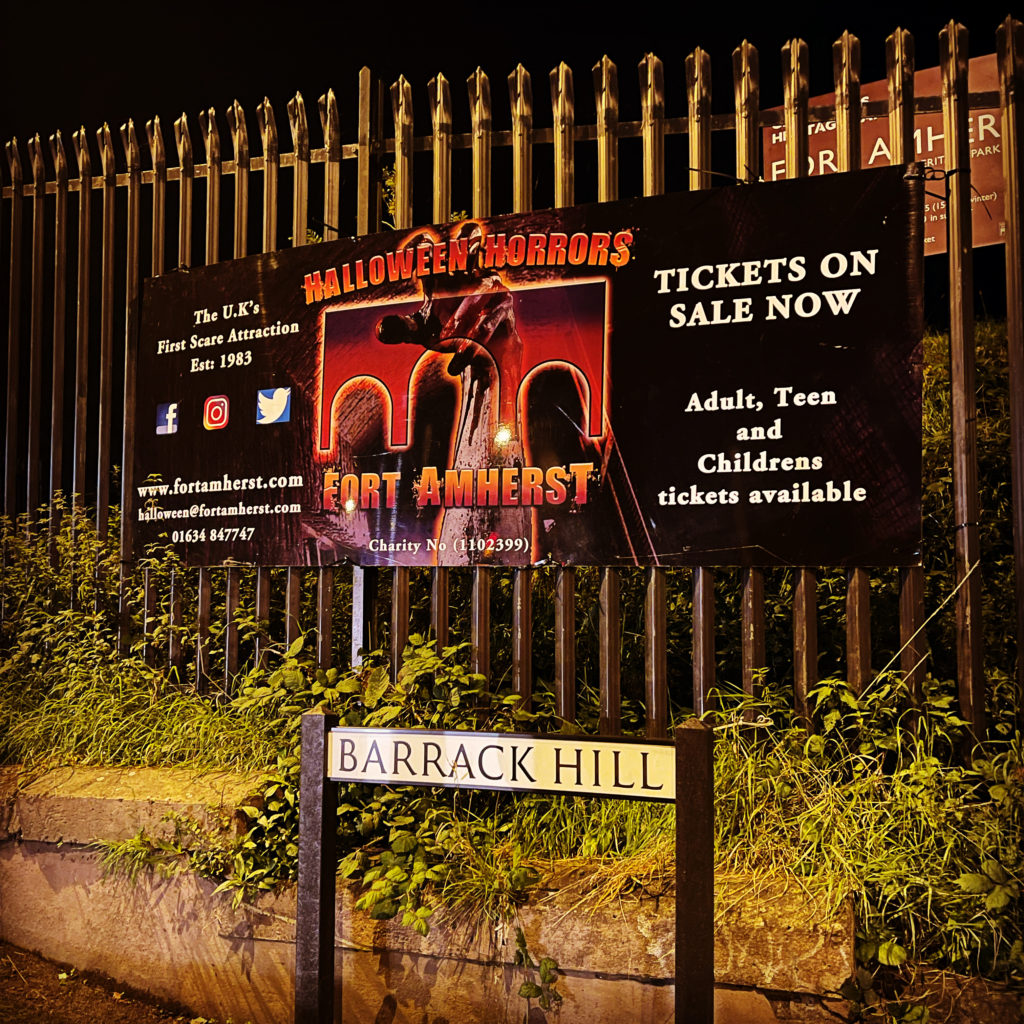 It was the Night before Halloween and our final event of the day was the longest running scare event in the UK, Fort Amherst Halloween Horrors. This event has been running since 1983 so we arrived with fairly high expectations.

I think we have to be fair to the event and get a few negatives out of the way first before we go into the details of the event itself. Firstly the size of the groups. The groups ended up being fairly large (20 to 30) this unfortunately had a number of knock on effects. The first was that in many of the scenes it was tough to see what was going on due to the sheer size of the group. Secondly the actor interactions took a long time to get through so while credit has to be given to the actors for giving everyone attention, you spent a lot of the time in a scene waiting while just watching others experience the interactions. This was okay at first but became quite repetitive and tiresome towards the end. Another aspect that a few events have is that whilst you have timed tickets, this time is purely to enter a queue, so the time stated on your ticket is not necessarily the time you enter the event, and you may have a substantial extra wait at busier times.

We were very unfortunate during our visit to have a few troublesome people in our group. They were being rude to the actors and at one point security had to be called but due to security being outnumbered by the rude visitors they were unable to do anything. This really left a bad taste in our mouth fairly early on.

The event itself is set in an absolutely fantastic location. Taking place in the various tunnels underneath the fort this setting works really well for the type of scares the event uses.

The scares are scene based rather than a constant walk. The start stop nature would work better if the groups were smaller as they ended up taking a long time with the scares becoming less impactful as they hit other members of the group.

The scenes themselves covered all the classic horror themes with a number of standout scenes. The scenes that really stood out were the vampires which used a really cool coffin effect, a prison scene with a fantastic soundtrack that buIlt to a crescendo where the inmates escaped and a really fun clown section. One actor in particular did a stellar job playing the part of a bad actor causing people to comment but later in the run through he returned with a callback to the comments people had given.

The event isn’t afraid to get up close and touch visitors. While we are generally fans of this engagement the size of the groups plus the repetitive nature of this reduced the impact. With a few small changes to the way the actors interacted this could be made an intense rather than repetitive experience.

Overall this isn’t a bad event, has some game actors, with fun scenes in a superb venue, but was seriously let down by the aforementioned experiences. This event has so much potential to be outstanding and to be honest with a few small changes would easily get there. Reducing the group sizes to 10 or so would enable shorter scenes so you could get the same throughout. This would overall make the experience so much better. The actors would also be able to engage and improvise so much better if they had less people to work with.

We will definitely visit again and I really hope that things can change for a future visit.