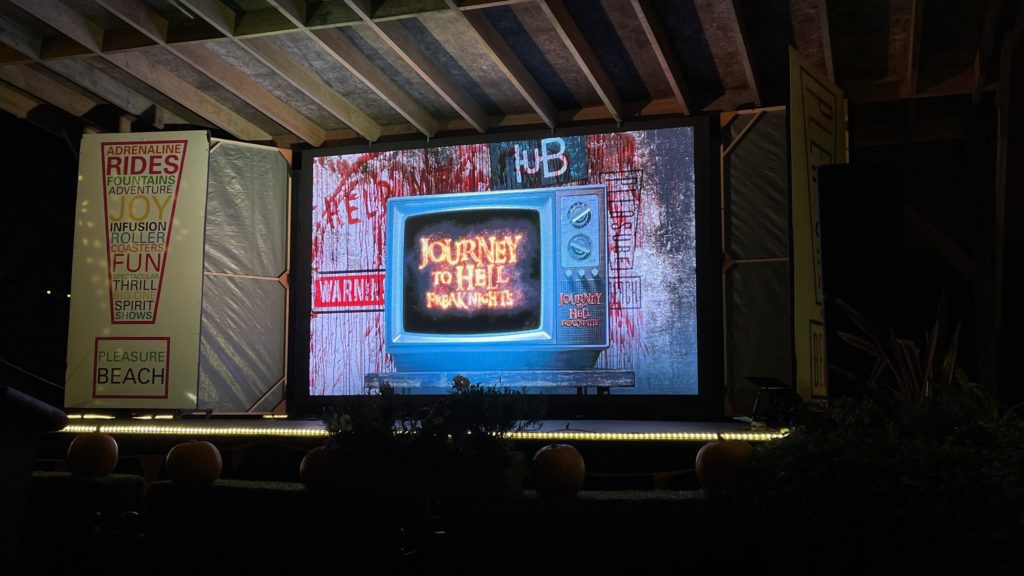 Another new event for us was the return of Blackpool Pleasure Beach’s Journey to Hell Halloween event. This ran for its first time back in 2019, and whilst we experienced the preview, we weren’t able to attend the full event, so we were keen to see what 2021’s event had in store. This review may be a bit more spoilery than our usual reviews.

Initially on arriving at the casino building it was very unclear where we were supposed to go and there was conflicting instructions from staff and the tickets themselves. We did however get this sorted and went in through the usual Noah’s Ark park entrance.

We were shepherded by a couple of actors to a queue line near the hub, where weirdly unfitting music was being played, though there was a nice bit of scenery and effects as we walked through the queue.

After our intake had caught up we then went in to the area where the dearly departed wild mouse was situated. In here we had a fun and impressive group safety briefing before being ushered to the queue line for river caves.

There were a couple of eerie actors in this queue, who if they had some slightly different direction or scripting could have easily freaked out everyone in the line. Eventually we got in to the boat and were given an ill fitting safety helmet with attached head torch. What followed was a ride in the river caves with the lights off and a few actors. Sadly the scares didn’t hit and the additional splashing felt a bit unnecessary.

On exiting we were pleased to be led to a side door leading backstage in the ride. We love the Pleasure Beach so the prospect of going through some of the tunnels away from normal public access was great for us. There were also some impressively designed sets dotted about. Unfortunately none of the scares hit, so whilst we had an interesting walk, that was about it.

We were then gamely and aggressively instructed to join a queue for the dome that used to house the Black Hole ride. As we went inside we had a very brief and to be honest, bizarre theatrical scene that didn’t feel like it made any sense.

After that, it was then in to ride Icon blindfolded, which whilst we loved it and would happily do again, it wasn’t a scare attraction. The ride ops were great and added immersion by being in character, it still felt like something we could do on any other visit to the Pleasure Beach.

Sadly this was compounded by a night ride on The Big One. Again ride ops were great, saying things like they’d found a few loose bolts, and mentioning one of the Final Destination films whilst we waited. If you’ve ridden The Big One you know what to expect. The view of the Blackpool Illuminations though from the top was amazing though.

Moving onwards we passed the spooky carousel that was a nice eerie touch and then headed through the maze, which had been changed in to a linear walk. Unfortunately in this section again the scares didn’t hit and the acting sadly lacked energy.

This continued after we’d exited the maze and went through the clown based scare zone, which was a linear walk through the area from Space Invader, past Avalanche and on to the Ghost Train. For a troupe of clowns to mostly just stand in place and literally just look at you from a distance was so disappointing, especially given so many of the amazing clown experiences we’ve completed this season.

Last up was a ride on the always fun Ghost Train, which offered a nice bit of nostalgia and the few Day of the Dead actors in this area were fun and full of energy.

Overall for our 75 minute experience at Blackpool Pleasure Beach we left feeling a bit short changed given this isn’t the cheapest event. There is plenty of potential here and would love to see some changes made in the future to provide some solid scares. Like many events this season we felt that a lot of the acting lacked energy and direction, so some relatively simple changes could be made to ramp up the event.

Journey to Hell Freak Nights runs on selected nights through to 31st October.