Around a year ago I kicked off my first proper year in scare, and whilst planning for Halloween I felt the need for some more immediate excitement. That quickly led to a trip up to Sheffield for Zombie Infection’s Factory event and somewhat unexpectedly, my first review for Scare Directory.

It feels kind of fitting to be writing this review of Zombie Infection’s Factory 2.0 event, not too far from the previous event’s Sheffield location, now at the Magna Science Adventure Centre just outside of Rotherham. As well as being a sort of anniversary, it was also Zombie Infection’s and my first post-lockdown scare event, and I was obviously keen to see how it would work with additional safety measures and social distancing. I was less keen on seeing how it would work on the hottest day of the year so far.

The Factory 2.0 as previously mentioned is in a completely new location from last year’s event, and what a stunning location it is. Even from the outside, the sheer size of the venue impresses. I made my way to the main entrance and was met by our ZI representative and the rest of my fellow civilians/zombie fodder. I was the last to arrive and joined 6 other random people each in three groups of 2 and all maintaining social distancing.

Obviously the biggest changes we’re likely to see in events for the foreseeable future are going to be how they deal with new rules and regulations around COVID-19. Zombie Infection has information on their website so it’s clear to see what they have done to improve people’s safety and it was great to see these being taken seriously from the start.

After the initial introductions, waiver signing, etc., we were given new unopened face masks, which needed to be worn throughout the event. These had to be given back at the end, but you could purchase one for £5 or a cool skull face snood for £10. You also could bring and use your own face mask if you prefer. At this point, you also have the option of upgrading your weaponry to either a rifle with torch and laser sight or a pistol with a torch for £10 each. The torch will help out in the very dark areas, and there are plenty of them, though you can’t use it too much as it attracts zombies.

Once done we were taken to a separate entrance and had our final safety briefing which now includes additional guidelines about the use of masks for everyone throughout the whole event, social distancing, use of hand wash, etc.. All fairly standard stuff nowadays, but nice to see it incorporated and monitored throughout the event. Given the nature of the experience, the one that I was most interested in was the social distancing aspect and I was pleased that throughout the event, given the size of the spaces in the venue and our small group size everyone, civilian, soldier and zombie alike were able to keep respectful distances the vast majority of the time and when not it was only for a fleeting moment.

Clearly it depends on the other members of the public that you are with, but the Zombie Infection team and the groups I was with used their common sense throughout, something that I’ve not seen day to day in shops. For me, I honestly felt more comfortable and safer at this event, than I have done going to the supermarket. 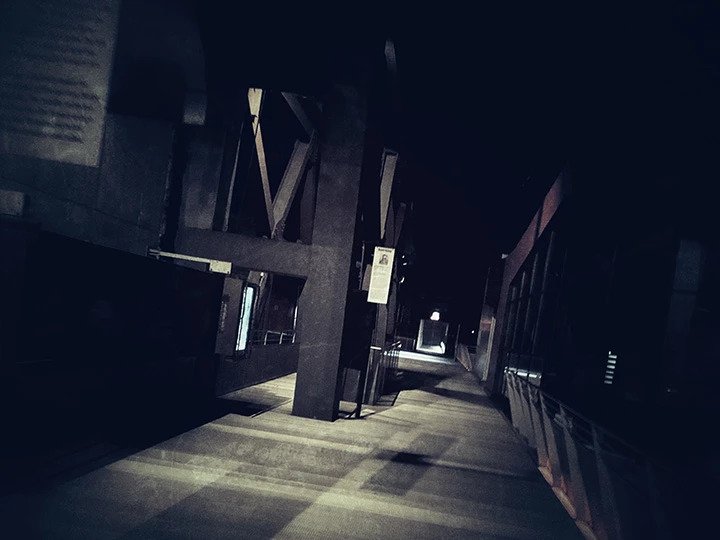 So what about the event itself? Well after all the necessary safety and instructional information, which was delivered well and very clearly from our Rep, we were led into the building, into a dark room and told to wait. We didn’t need to wait long before the experience opened with a bang, both figuratively and literally. This opening section does a great job of unnerving you and instilling a sense of panic and fear right from the start, leading to some rushing around and eventually a brief moment of much-needed respite. During this rest, amongst the confusion, we were already down to five civilians. At first, I thought it was part of the story, but sadly one couple felt that this wasn’t the right event for them and had left.

Factory 2.0 is a new story for 2020 and I’ll try my best not to add any story spoilers other than what you can find out before booking. When we finally managed to find a suitable safe zone to recover more fully we’d already seen quite a bit of the inside of the very impressive interior. This place is huge and the event takes places over many different areas of the building. The whole place, despite being used for more normal activities during the day is transformed into a superb venue and is probably my favourite of all the various zombie events I’ve been too so far.

The Magna Science Centre was meant to be a secure safe zone for the protection of anyone uninfected, but somehow hasn’t been properly secured and is still overrun with infectious zombies. Could us five civilians, with the help of the few soldiers we’d encountered secure the facility and find out what happened to the team that was sent to secure the facility prior to our arrival?

What followed was a full-on two hours-ish of fairly relentless zombie encounters, alongside plenty of tension, panic, intrigue and some solid scares as we wound our way through the various areas and levels of the superb venue. As we were a small group we were outnumbered at least 2 to 1 by the zombies so there were very few instances of downtime, thankfully the story had a few more theatrical scenes that allowed for some much-needed catching of breath. 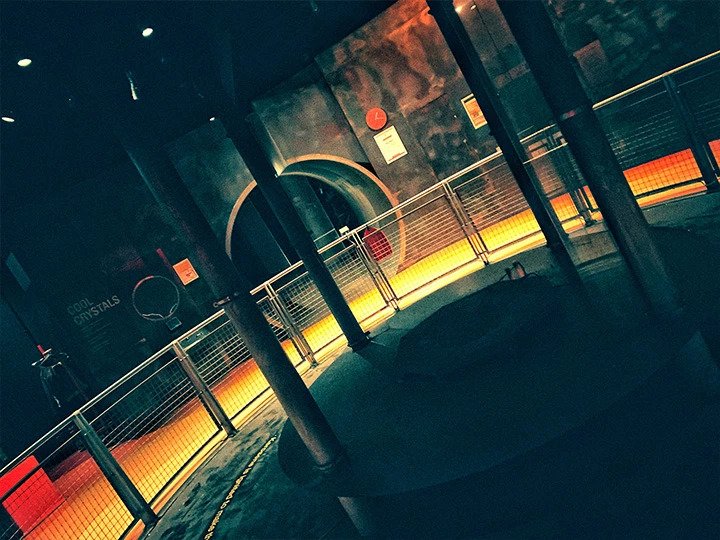 In this event, you don’t need to deal with the zombie hordes empty-handed and you eventually get ‘tooled up’ with a suitable zombie pacification device a.k.a. a gun. I ended up with a realistic, heavy airsoft rifle and unlike last year’s event these shoot ‘percussive’ blasts of air to take down the zombies and not airsoft pellets. Personally I thought that this enhanced the experience rather than detracted as you can now aim for the head (a big no-no when you’re shooting projectiles at an actor), you don’t need to wear protective eyewear, and no doubt an essential given the nature of the venue, there are no annoying plastic balls everywhere and there’s no risk of friendly fire.

Also, some of the mechanics, such as ‘reviving’ infected team members who had been touched by a zombie have been removed. I don’t know whether that was a conscious change to the gameplay or a convenient necessity given the lack of contact. Either way, I thought it really helped improve things.

As with any event, actors make all the difference, and at The Factory 2.0 the Zombie Infection team were on top form despite the heat. I mentioned we were easily outnumbered by the zombies and they were fairly relentless in pursuing us, civilians and soldiers. As always there were great costumes and makeup even if I didn’t get particularly close to see all the detail. Each actor brought their own element to the performance leading to many jumpy, tense, and scary moments, as well as some wonderfully dramatic deaths. Hats off to one actor who took me completely by surprise down in the basement eliciting my first bit of blasphemy in months and laughs from my civilian companion at my reaction. The Zombies remained in character throughout the whole event and even at the end when we had our socially distant pictures taken with them.

Clearly a very passionate team who did a stellar job playing the Zombie horde as well as the human’s we encountered that provided the more theatrical elements to further the narrative.

Overall I thought that the story of the event was much punchier and easier to follow than last years Factory. Similarly, the gameplay was more streamlined and for me, it greatly benefited from it. Added together the whole event felt much better paced and the two hours flew by to the extent that I was sad to see it come to an end. I’d have happily carried on for longer at that pace despite the heat and exhaustion. I’m not sure everyone in our group or the actors felt the same and so was probably the right length for the experience. I feel that I benefitted more from the smaller group size we experienced, however, there’s no guarantee that it would be that small in future events.

The multi-award-winning Zombie Infection run a number of events throughout the country, so hopefully, there’s one not too far from you and each one tells its own specific tale of the wider ZI ‘universe’ which obviously helps to keep things fresh if you go to multiple events. They have also recently introduced a new ‘Zombie Infection Captain’ annual membership which as well as other benefits allows you to attend as many standard priced events for 12 months.

Factory 2.0 is the first chapter in the ZI set of events so local lockdown and travel permitting I’d love to do more to see how the story develops. As previously mentioned I felt safer doing this event than visiting a supermarket and despite running around a massive building over multiple levels, with a face mask on permanently for two hours on the hottest day of the year, I didn’t find it that much of an inconvenience or hindrance, your mileage may vary though. The venue was superb and the whole team at Zombie Infection entertained with a fun, safe, scary and non-stop slice of the Zombie Apocalypse.

I had a really good time at my first post-lockdown, socially distant event and look forward to attending more Zombie Infection events or their really cool, new for 2020 series of events Turf Wars. More details of all Zombie Infection events can be found on their website or you can find them on Facebook, Instagram, Twitter, YouTube, and Twitch. 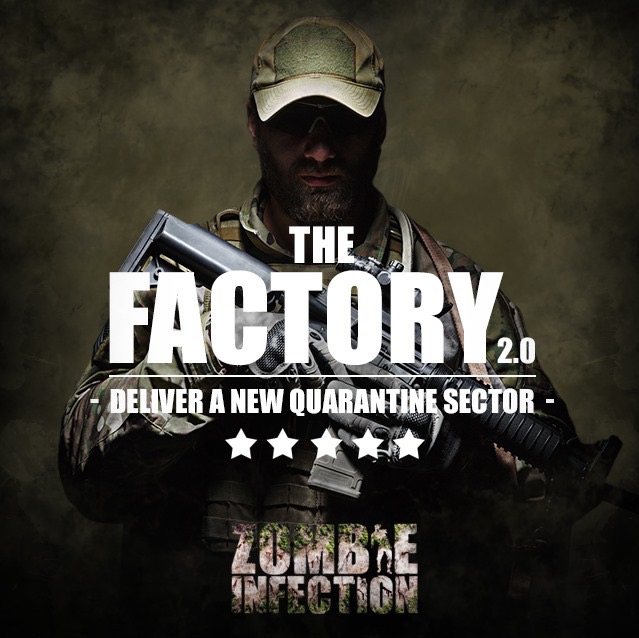