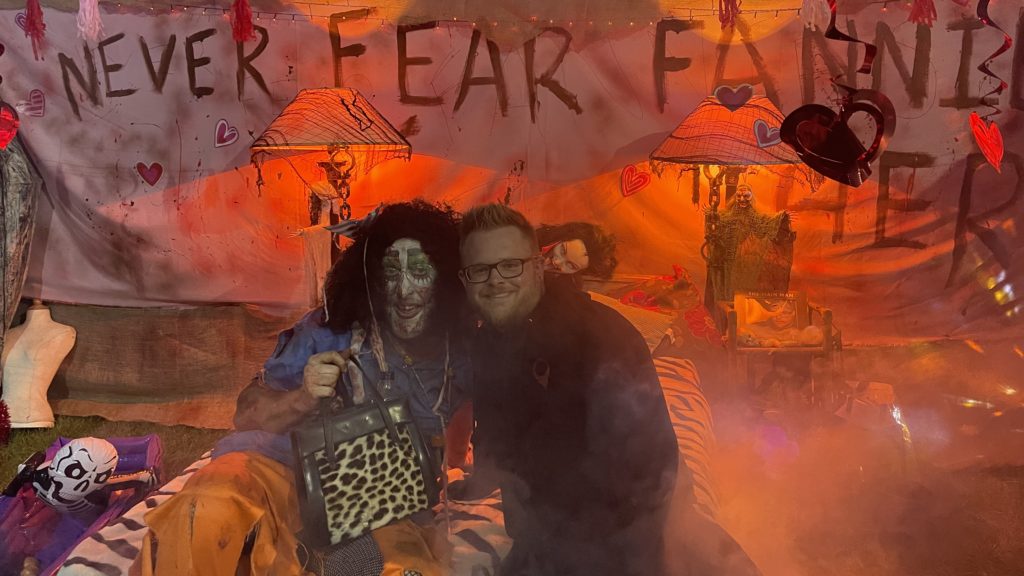 Another event in the South of England that we hadn’t been able to attend previously was Scream Aloud situated between Brockenhurst and Lymington in the New Forest.

Upon entry to the car park it was great to see a massive circus style big top tent and a few fairground rides, midway games and a food truck. Inside the main tent there is also a bar with some seating, the main queue line for the attraction, and a wonderfully themed bedroom, belonging to the hostess with the mostest, Miss Fannie Burns.

Fannie and another chainsaw wielding roaming actor entertained the group in the main area and the queue line. The queue line inside the big top also had an entertaining fire act and DJ. As we waited we even got invited to hammer a nail in to the roaming actors nose, a fun touch and something a bit different.

After a 20 minute wait, we were invited to start the mazes, ending up in a group of five. We slowly made our way through the approximately 20 minute walk through the woods, guided by roped off areas, fencing and black sheeting. There were a few small wooden buildings that we went through as well with a little bit of set design. Given the great set of Fannie’s bedroom, the sparseness during the walk felt slightly disappointing.

That said, a lack of themeing isn’t the end of the day and thankfully the actors that we encountered did a game job as we went through, as with many events this year it felt like a few more actors were needed to ramp things up. Early on they used the natural environment well and landed some decent scares, a few ad libbed really well as they exchanged a bit of in character banter on our run. We felt that they did a good job with what they had. Sadly it just felt a bit short and the three sections didn’t feel separate and distinct to us as it wasn’t immediately obvious when we were transitioning between sections or just going through a dead spot.

We’d love to see what the team could put on with a bit more budget for the mazes and maybe if they were a bit clearer between sections. Even if done as a couple of distinct mazes with queues in between may add a bit more cohesion to the scare part of the event rather than it being one long walk in the woods.

Scream Aloud has potential, the central area, small but very fun street team, and game troupe of actors were great, but felt slightly lacking in others. We’d be keen to return if changes were made in this regard. Scream Aloud runs through to 31st October.