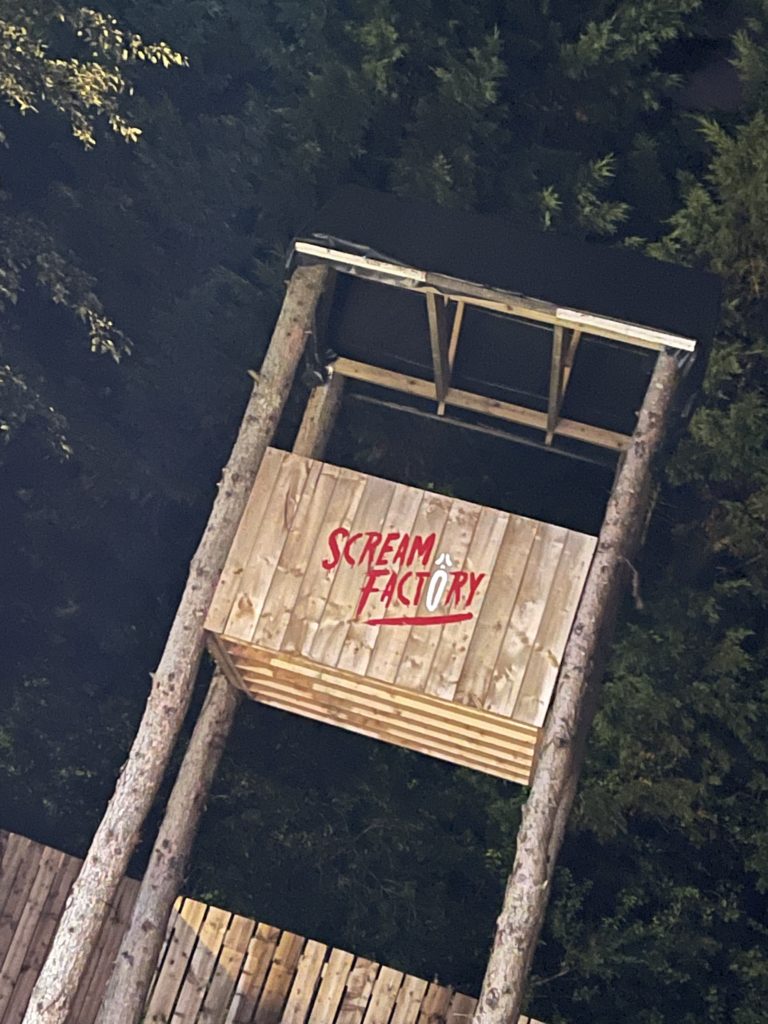 We’ve always had a great time at Scream Factory, either at Halloween or in their out of season events. After being forced to close at the last minute in 2020, we were really keen to see what the team had got up to with the extra year off. Scream Factory is located at Kirkleatham Museum near Redcar in the North East of England. Due to our awkward itinerary, we ended up arriving a bit later than most people at around 9pm on an unseasonably warm Saturday evening in October.

As we parked up in the permanent car park, before we even got to the entrance we noticed a few things on the path to the start and had some fun interactions with a couple of groups of actors before we’d even begun. This was a good humorous introduction and a nice change up for this year’s event. After going through the always impressive ‘castle’ entrance we noticed that the central hub had been changed up from previous visits and despite being one of the last people to arrive there were still a good few people enjoying the vibe and interacting with the roaming actors. We got our obligatory dance in with the always amusing silent clown before we went in.

Scream Factory is a linear and long scare maze with multiple different themed zones and buildings. The start hasn’t changed much with a visit to ‘The Abattoir’. This is always a great beginning to the event that perfectly sets up the tone i.e. a bit risque, and provides some decent scares with some impressive set pieces and design. An early theatrical scene was, as always superb, with some great improvisation from the actors.

Next up is ‘Dystopia’ which is another fun area with more traditional scares, which leads into the new for 2021 ‘Meat the Butchers’ section. This was always a highlight of ours previously, but the Scream Factory team have some changes and again impressive new props and set design to provide another fun walk. This led on to ‘The Cursed Mine’, where we were pleased to see one particular element on top form for us thankfully, as we love that type of room, with the more theatrical element working well.

‘The Mine’ leads on to ‘Demented Dminesions’ and the very creepy ‘Garden of Lost Souls’ outdoors section. The final three sections saw us back indoors for the returning ‘The Silver Screen’, this has some really good theatrical scenes which were again very enjoyable thanks to the actors improv.  The other new section for 2021 ‘The Purging’, this is outdoors and has an impressive set up for it. Finally we finished in the familiar ‘Carnevil of Carnage’. Sadly due to COVID the final hooded section has been removed, which as we normally don’t enjoy hooded mazes, we were genuinely sad to see go.

Because of this the overall route has changed slightly and after the familiar petrol powered finale you emerge into a new section of the central hub ‘The After Shock Bar’. The previous bar is still there, but there is now a supplementary one, also offering pizzas and waffles, three other food options, a stage and central fire pit and the photo opportunity near the entrance / exit.

As mentioned we’ve always had a great time at Scream Factory and thankfully despite the hiatus, they’ve not lost any of the charm from previous events and have been able to change things around slightly for 2021. The actors, especially the ones with more theatrical scenes are great, and it was great to see some familiar characters returning again this year, or in a slightly different section. The changes to the hub are great and we hope people will stay at the event after their run through as it can easily generate a good vibe, with some nice food and drink options.

Scream Factory runs on selected dates through to October 31st with a couple of different ticket options for your run through. If you’re relatively close, it’s a no brainer for us and you should check it out. If it’s a bit of a trek, make a night or weekend of it, but doubling up with other options in the area. Thanks to the actors and team at Scream Factory, we had a blast and can’t wait to see what they have in store for 2022.