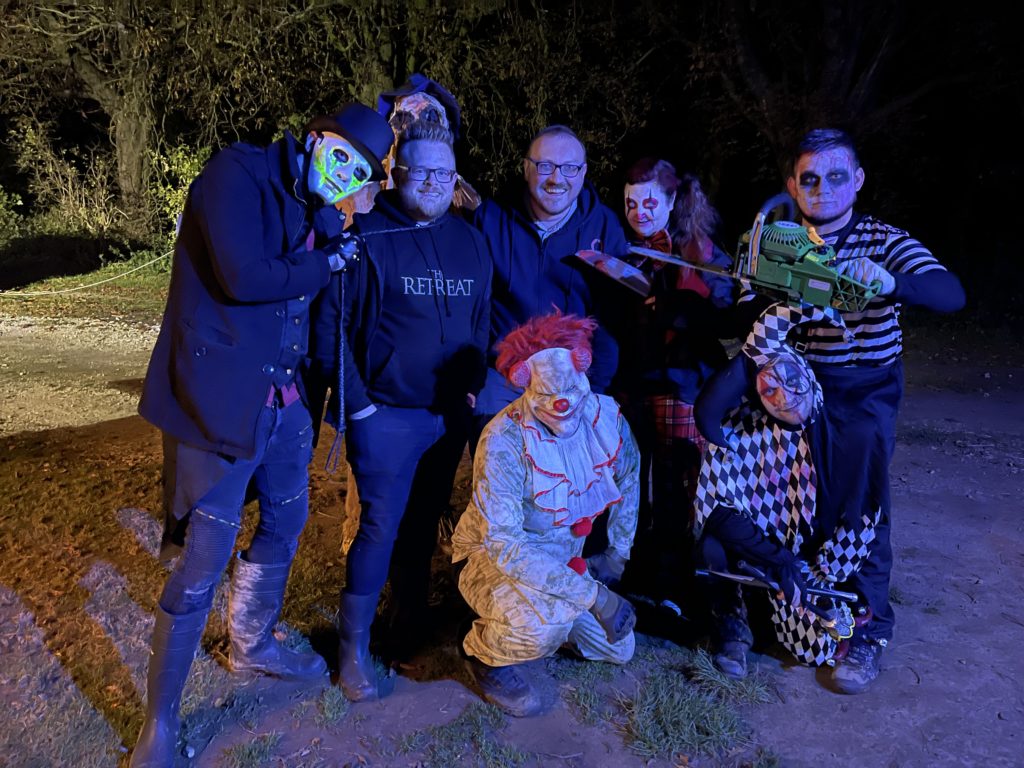 We were lucky enough to manage to get to Nott’s Maze near Nottingham just in time to go through the attractions before closing. As we were quite late we ended up going through the two mazes pretty much alone. Before you go in there are the usual amenities including a bar and a fire act.

First up was The Labyrinth: Corn Evil, a twisted take on a traditional corn maze inhabited by a variety of different actors from the circus. First up this is a massive free roaming traditional maize maze, the actors may herd you in different directions, but you are free to roam to your heart’s content. There is also a fun game to be played as you explore trying to find a number of runes dotted around the maze. Given the time and that we almost immediately lost our pen, we didn’t complete this fun aspect that ensures you’ll explore everywhere getting a number of scares from the inhabitants of the maze. Our scares started almost immediately as we met the Jester, Colin, who brilliantly harassed us throughout most of the time in the maze. The Ringmaster also gave us some very different creepy moments near the start and from then on we roamed about meeting and getting some fun scares and interactions with most of the energetic actors throughout the maze. Sadly as we were walking quickly we missed a few, but if you have the time to explore we’re sure you get harassed on multiple occasions.

Next up was the new for 2021, The Village. This was a more traditional linear walk through some spooky woods, inhabited by a bunch of cultish villagers. There were some nice touches to the design of this maze, and as with the Labyrinth, the actors were on point and full of energy as they scared and creeped us out as we wandered through, and one even continued to unnerve us right to the exit.

Nott’s Maze bill this as a 17+ event, however they also offer a variety of other experiences throughout the day, so if you can’t make the scary event, which runs on selected dates through to 31st October, the others would be worth your time. If you are nearby it’s well worth a visit for a different type of scare experience, which whilst doesn’t have the budget of your bigger more traditional scare events, does have a lot of passion from the actors and team involved. Thanks to them for letting us squeeze in the last run of the day.