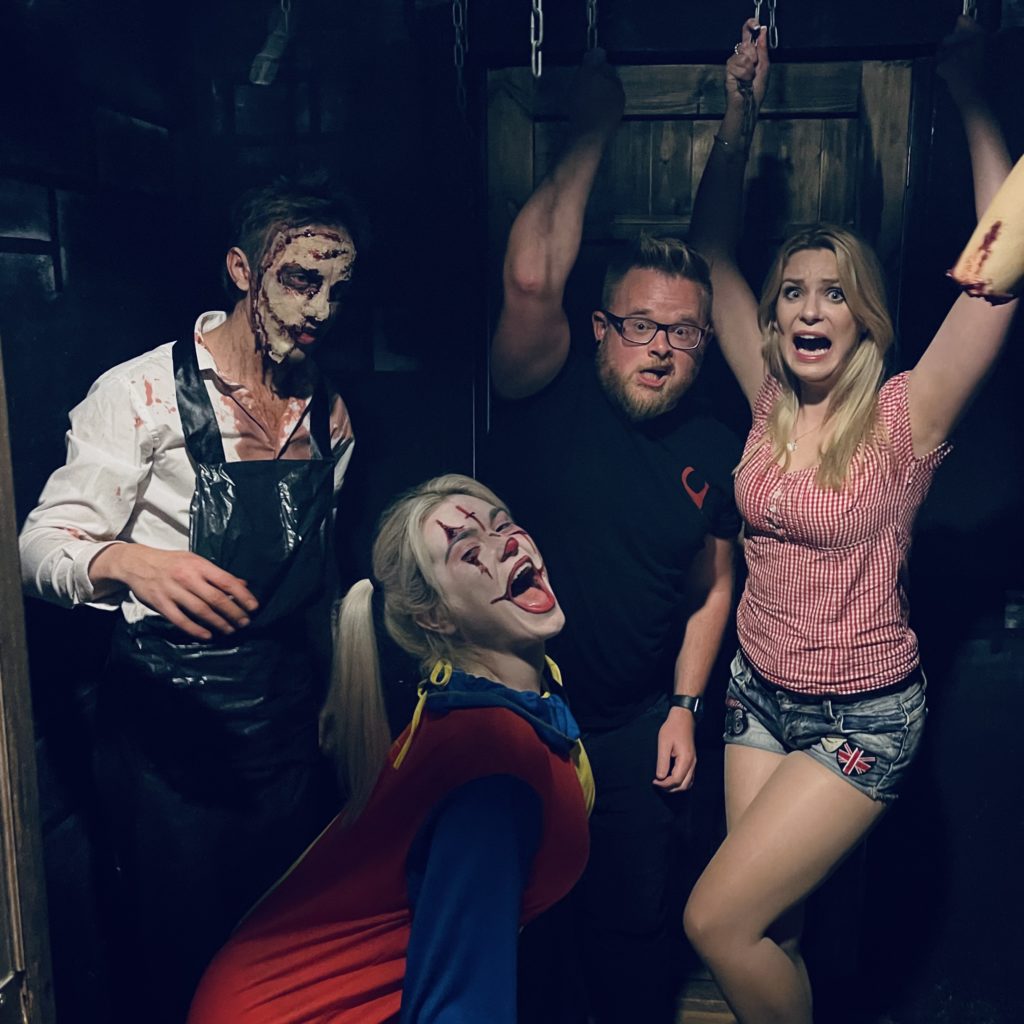 So it begins, the first of many reviews of Halloween events across the UK. A Halloween season that kicked off with a bang visiting No Escape London to preview their collaboration with UK Haunters. So what does this collaboration bring to the table? Well, you get to experience one of seven escape rooms but with a twist! Within each room you and your friends will not be alone. In each scenario you will be joined by a terrifying actor. These actors fit in with each of the rooms theme from a butcher to a dentist. Each character giving a different experience providing multiple scares along the way, while you and your friends try to escape.

During our visit we experienced the butcher room where we were immediately thrown into the thick of it, trying to figure out how to free someone from a restraint. From here on in we were left to solve a multitude of puzzles while also being terrified by the lurking butcher who would pop up throughout the experience frightening us and offering a fun and terrifying additional element to the escape room.

The theming in the butcher room was fantastic from the initial room with chains and body parts through to other areas where you had hanging pieces of skin and butcher paraphernalia. This along with the butcher himself added to the immersion in the room. As alluded to previously there are multiple rooms to explore with enough space for a group of 6 to explore comfortably.

The challenges and puzzles included were fairly varied with some involving numbers, visual puzzles plus your more traditional lock and key type challenges. This enabled everyone in our team the possibility to ace at least one puzzle each which is always a nice element to a room. If you’ve done a lot of escape rooms the puzzles will have an air of familiarity except one interesting concept involving a camera that I haven’t seen in an escape room previously, this was fun and we found the included torch useful for a number of aspects in dark areas of the room. We didn’t end up using a clue so can’t effectively comment on how they were delivered. Though talking to the team after the room I believe the clues can be delivered physically under the door.

The actor in our room was superb at times blending into the background to the point you forget they are there to bursting out causing us all to jump in fright. He really worked the room well even causing the seasoned scare event visitors to jump. But scares aren’t just about jumping out of your skin, the butcher also managed to give a sense of uncomfortableness that I feel to most costumers would make them feel uneasy throughout the experience.

Overall this was a fun room. I feel the addition of the actor was fantastic and just made the experience that much more immersive. While the puzzles themselves weren’t revolutionary they were enjoyable and varied with a nice challenge level. The theming was top notch and along with the actor completed the experience. Having a sneak peek at another one of their rooms The Haunted Toy Store I’d definitely be keen to revisit and experience what the other rooms by No Escape are like.

The UK Haunters & No Escape Halloween Special runs from the 28th to the 31st October where there is a special Halloween overlay to each of the No Escape rooms adding that extra bit of fun and suspense. I’d recommend visiting if you are new to escape rooms or a seasoned pro as the addition of actors makes the whole escape room experience that bit more immersive and interesting.