Keen to eke out as many scare attractions as I could, I noticed that COLAB Theatre were running their Halloween immersive theatre event, Silence until Sunday 10th November. Having enjoyed one of their previous events, Spy City, I was keen to see what lay in store.

Silence is based at COLAB Factory in Borough, London, a venue I’m familiar with after escaping a serial killer’s twisted games in the past. As we were waiting out side we met with a frantic vicar, Rev. Stanley Park who led us in to the building and introduced us to his mostly silent assistant Brother Nicolai.

As we exchanged our chips for a series of three vials and a cup we sat around a large table waiting for the rest of our 20-ish strong group to arrive. All the while entertained by the very energetic Rev. Park. Eventually when we all settled the Reverend started proceedings, explaining the mysterious story of a murder that happened within the building when it was a facility to treat young soldiers from shell shock from WW2 and the Korean War.

As you’d expect there were rumours of unorthodox treatment and perhaps mysterious Government interference in the experiments that these poor souls had to endure, before the untimely demise of one of the ‘volunteers’. The victim’s spirit was believed to still roam the lower levels of the building and we were tasked by Rev. Park to solve the mystery of who was murdered, by whom, when and what the method of murder was.

Before we started in earnest we imbibed the concoction from the three vials that represented the holy trinity before commencing with a séance. After the spirit had cryptically communicated with us, it was time to solve the mystery. At this point there was lots of splitting the large group up in to more manageable groups of two. Each had a variety of different tasks in the downstairs section of the building. 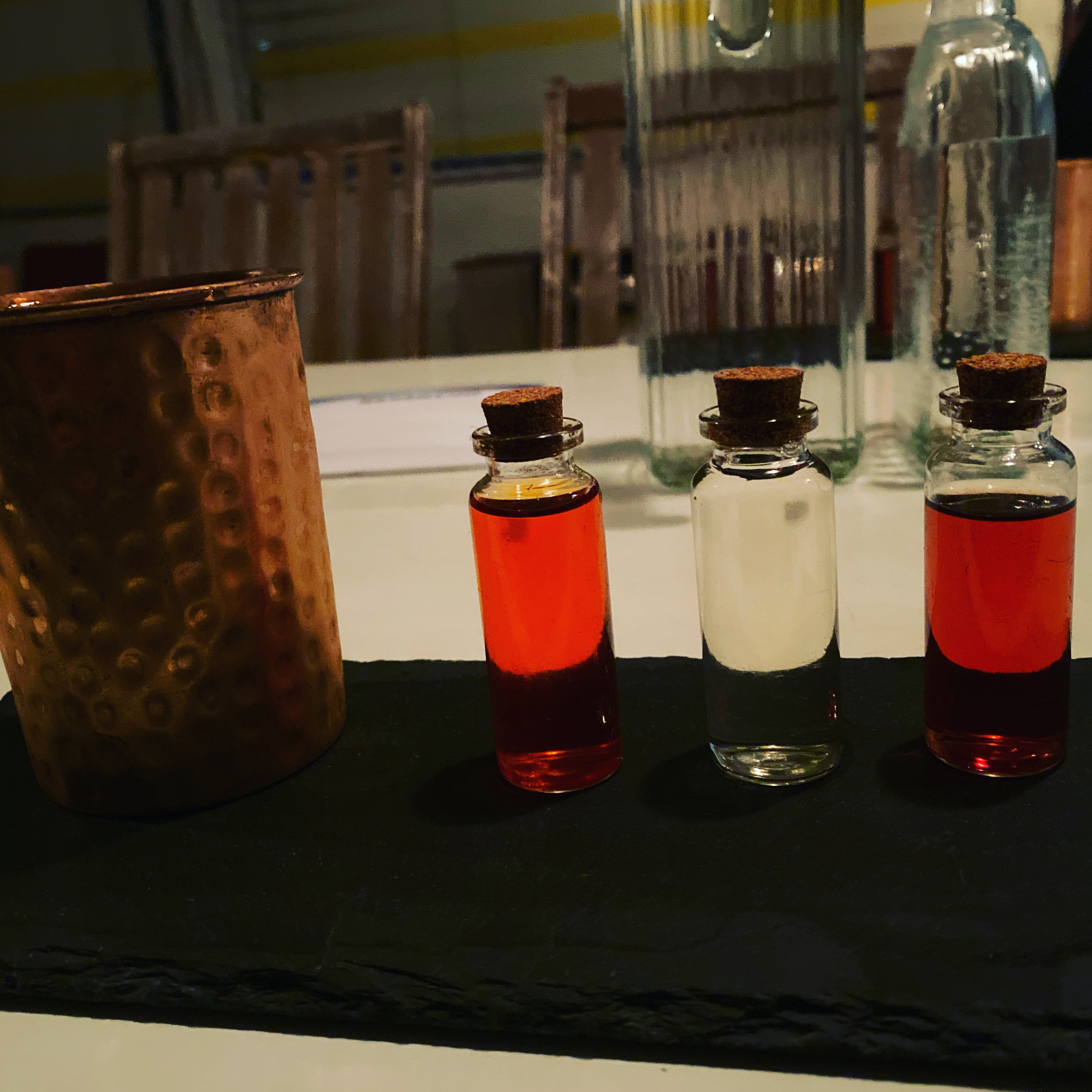 As we were waiting our turn to venture in to the downstairs section, we received our instructions from Rev. Park, most importantly was that the vengeful spirit that was believed to inhabit the area was drawn to sound, so Silence was the key to our success. Given some of the scares from my encounters with the spirit, it clearly had much better hearing than I and provided some fun jump scares that led to many of our group running away in fear. After the first treasure hunt challenge was completed we had enough information to solve the first part of the evening.

As such we were able to deduce, who the poor soul was that was murdered, how and when they were killed and finally who was responsible for the crime. This was all done with the ever circling Reverend in our safe room upstairs. He deftly guided us to the right conclusion, with good humour.

That complete we had a further series of small group challenges in the dark in order to gather the necessary items and information to complete the exorcism of the spirit. At one point, our group had to do something that we knew would draw the spirit towards us and we had to complete it with this sense of foreboding looming over us. One of our group ended up having to go it alone to get the necessary item.

Once all of our group successfully completed their tasks, it was time for the exorcism, which we all had a final part to play. It ended with a nicely poignant and emotional finale.

I had a thoroughly enjoyable couple of hours participating in Silence. There was a good mixture of theatrics, puzzles to be completed, items to be found, scares to be enjoyed and a mystery to be solved. It wasn’t until near the end that I managed to see the scale and variety of different rooms over multiple levels that we could potentially explore all with some good sets and theming so you knew what it entailed in each room. The last time I visited this venue it was completely different, resembling a Saw-esque murder dungeon, so was great to see how well the space can be used for alternative themes.

The three actors were superb, in particular, Rev. Park as he practically held the whole event together from beginning to end, not breaking character until after the event. Hats off to him, as he really made the whole evening so entertaining and fun. I had a thoroughly great time and would definitely recommend it if you can make it to one of the few remaining nights. If not, I’ll definitely try checking out COLAB Theatre’s other immersive non-horror events.

Silence runs every evening with limited availability through to Sunday 10th November.